Metacon Gun Club knows that supporting 2nd Amendment Rights for our members, and the community in general is critical. 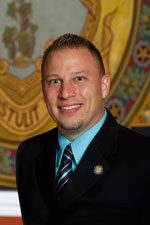 State Rep. Rob Sampson represents the 80th General Assembly District covering Wolcott and Southington. Rob has furthered his reputation as an ardent protector of the constitutional rights enjoyed by gun owners by leading the legislative effort to beat back proposals aimed at eroding the Second Amendment and has proposed bills aimed at protecting the rights of Connecticut gun owners. As an American history buff, Rob understands the significance of our Second Amendment and the critical role it plays in preserving the freedoms we enjoy each day.

He has provided legislative briefings on gun-related issues to several local gun clubs and pro-Second Amendment organziations and is a member of the NRA and the Connecticut Citizens Defense League.

Some bills introduced by Sampson were proposals to allow Sunday hunting and another that would have strengthened Connecticut’s Castle Doctrine law. His proposal allowing gun permit renewals by mail won support from the legislature and was later signed into law.

Sampson lives in Wolcott with his wife, Tammy and is a fellow member of the Metacon Gun Club along with his parents, Margaret and Charlie. We welcome Rob’s insight into legislative issues that involve the Second Amendment.

April 15, 2012 update-
Throughout and even before my political career, I have been concerned about the federal governmentâ€™s slow but steady encroachment into our lives.

Our typical yearly roster of legislative action is rife with reactionary proposalsÃ¢â‚¬â€many of them thinly veiled attempts to pursue personal agendas far adrift of the needs and opinions of the men and women whose tax dollars cover their salaries and benefits.

For an example, look no further than last sessions attempt to pass into law S.B. 1094, An Act Banning Large Capacity Ammunition Magazines.

This proposal sought to ban the sale of ammunition magazines that hold more than 10 bullets, and it would have required law-abiding citizens who already own such magazines to turn them over to authoritiesÃ¢â‚¬â€or risk a felony charge and prison time.

The billâ€™s proponents stated that their goal was to protect residents from gun-wielding criminals driven to commit murder. To make their point, they resuscitated hysteria generated by headline grabbing police cases in other parts of the countryÃ¢â‚¬â€crimes driven by the perpetratorâ€™s frame of mind and motivations rather than a gun.

People who commit such crimes are criminals and criminals, by definition, donâ€™t care about laws. A person bent on shooting another wonâ€™t be deterred by an arbitraryÃ¢â‚¬â€the 10 bullet limitÃ¢â‚¬â€restriction shackled on the rights of law-abiding citizens who understand the responsibilities of gun ownership. If you think criminals will turn in their illegal weapons, then Iâ€™ve got a bridge Iâ€™d like to sell you.

Would such a ban have made us safer if law-abiding citizens are the only people who dutifully marched down to a police station to hand over their weapons?

It wouldnâ€™t, and the people who wrote and supported this proposal know it. Their true target isnâ€™t our guns, but our right to own them. Recent history shows us theyâ€™ll continue to attack that rightÃ¢â‚¬â€one proposed bill after another.

I bring all of this up as a preface to issue my most sincere thanks to the many 2nd amendment advocates who participated last year in a definitive and concerted effort that resulted in the failure of the aforementioned legislation to become law.

This victory was a result of the enormous political pressure placed on proponents of anti-gun legislation by concerned Americans who believe like I do that this country was built on the principle that its citizensÃ¢â‚¬â€and not the governmentÃ¢â‚¬â€hold the power to control their own lives.

The 2nd Amendment clearly states that our right â€œto keep and bear arms shall not be infringed.â€ This is a key protection to our sovereignty as individuals, acknowledging our right to protect ourselves.

Thatâ€™s a Constitutional right Iâ€™m unwilling to give up.

Below are some links that you can follow to keep up-to-date on the political landscape both in Connecticut and nationally.

www.nssf.org
The National Shooting Sports Foundation is the trade association for the firearms industry. Its mission is to promote, protect and preserve hunting and the shooting sports. Formed in 1961, NSSF has a membership of more than 6,000 manufacturers, distributors, firearms retailers, shooting ranges, sportsmen’s organizations and publishers.

www.nraila.org
Established in 1975, the Institute for Legislative Action (ILA) is the â€œlobbyingâ€ arm of the National Rifle Association of America. ILA is committed to preserving the right of all law-abiding individuals to purchase, possess and use firearms for legitimate purposes as guaranteed by the Second Amendment to the U.S. Constitution.

http://www.ctsportsmen.com
The Coalition of Connecticut Sportsmen is the only state sportsmenâ€™s organization singularly dedicated to the protection, promotion and preservation of hunting, fishing, trapping and the scientific wildlife management programs which support them; Right to Keep and Bear Arms Constitutional provisions; Boating; Land use; and other sportsmen associated issues through legislative lobbying, legal defense in the courts, and political action. No other state sportsmen organization has as its sole purpose these activities. The Coalition of Connecticut Sportsmen takes pride in its unsurpassed achievement and service to all of the Connecticut sportsmenâ€™s community.

The Connecticut Citizens Defense League is a non-partisan, grassroots organization devoted to advocating rights affirmed by the Constitutions of the United States of America and the State of Connecticut. We are especially dedicated to protecting the unalienable right of all citizens to keep and bear arms, for the defense of both self and state, through public enlightenment and legislative action.

We welcome anyone who believes that the defense of our constitutional rights is critical to the longevity of our freedom and to the success of this nation, and in particular that the rights to self defense and to keep and bear the arms to actualize that defense, are fundamental and undeniable.

www.gunowners.com
Gun Owners of America (GOA) is a non-profit lobbying organization formed in 1975 to preserve and defend the Second Amendment rights of gun owners. GOA sees firearms ownership as a freedom issue.

GOA was founded in 1975 by Sen. H.L. (Bill) Richardson (now retired). Richardson continues to serve as the Chairman of Gun Owners of America, bringing his many years of political experience to the leadership of GOA. Richardson is also an avid hunter and outdoorsman.

The GOA Board of Directors brings over 100 years of combined knowledge and experience on guns, legislation and politics. GOA’s Board is not satisfied with the “status quo.” Americans have lost some of our precious gun rights and WE WANT THEM BACK! This is why GOA is considered the “no compromise” gun lobby.

From state legislatures and city councils to the United States Congress and the White House, GOA represents the views of gun owners whenever their rights are threatened.

GOA has never wavered from its mission to defend the Second Amendment — liberty’s freedom teeth, as George Washington called it.